Just a Geek by Wil Wheaton 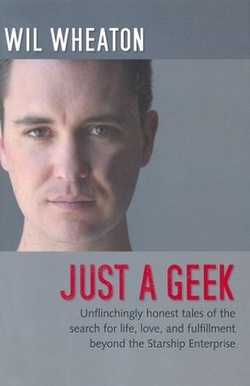 Apparently I missed the fact that Wil Wheaton wrote a book. In 2004.

But, better late than never I suppose.

From Stand By Me to Star Trek: TNG (I never fully understood why Wesley Crusher was so reviled by so many Trekkies...) to Table Top, Wil Wheaton has been a well-known face among geeks, nerds and various other assorted fans for quite a while.

Just a Geek is Wheaton's memoir of that "in-between" time after he left Star Trek: TNG and before he essentially re-branded himself as the quintessential geek.

That said...it is angsty and it is full of confessions of self-doubt...so much so that one might think the book takes on an almost whiney tone at times.

But, can you blame him? I know I certainly can't fathom what it was like to be a child star only to fall off the radar. While the book does take on a certain tone at parts, it's also quick to point out personal triumphs and turning points. It comes across as a seemingly honest and exposed memoir of his "in between" period.

"In between what?" you ask? Well, like I said, the book was written in 2004. I guess my geek card gets suspended for a few days because I totally didn't know Wheaton was an author beyond his popular blog that I check sporadically (so sporadically I didn't see where I am sure he promoted his books on said blog). Now, in 2014, Wheaton is the host of the popular web series TableTop - one of the main shows on the Geek & Sundry channel. He has also been so successful as branding himself as the quintessential geek that he can now make cameos of himself on popular shows like Big Bang Theory and the like. Obviously the tides have turned somewhat for Wheaton. No, it's not the big movie career he had hopes for after his departure from TNG...however, he is now known as WIL WHEATON...rather than that guy who played Wesley Crusher from TNG. I'd call that a success.

Just a Geek is a fun, if slightly dated, read. And one thing is for certain - Wheaton can write in a style that, as Picard would say, ENGAGEs the reader and is probably best enjoyed while drinking a cup of Earl Grey, hot.