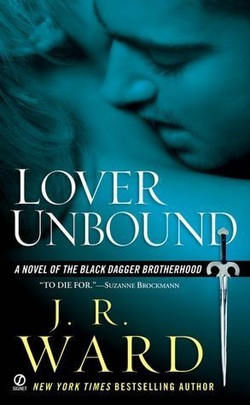 I think I've realized that the back cover blurb (BCB) on the back of the Black Dagger Brotherhood (BDB)books are only nominally descriptive.  See, if we were to go by the BCB of this BDB book, we would expect a book dedicated to Vishous.  And when a hugerevelation about Vishous is discovered within the first fifty pages or so...you realize that yes Vishous needs an entire book to explore his background and progression within the main story arc.

As you read further, however, you realize that the BCB wasn't helpful at all.  Yes, you do learn some more about Vishous.  But an equal (if not more?) amount of time is spent on Phury and John.  While I am looking forward to both of their books...this was a book about Vishous and I wanted to read about him.  Instead, it seemed as though Vishous was relegated to the background for a lot of the book.

Because V seemed to be a "background character" at some points, his romance with Jane seemed about as deep as a parking lot puddle.  And because the romance seemed contrived and based solely on lust (and, despite Jane's opinion otherwise, there may have been some Stockholm Syndrome at play here...), the big twist in their relationship at the end was kind of weird.

I don't mind that Ward tells a huge story in each of her books.  And I understand that the books are going to feature all of the Brothers to some extent.  I just wish that more time had been spent on V.  Even compared to the earlier books...this installment seemed less focused and more of a filler novel.

And while I am looking forward to the next book which features Phury...I feel as though most of his story has already been told in Lover Unbound which makes me wonder if Phury's book will do the same as this one - focus on everyone but him.