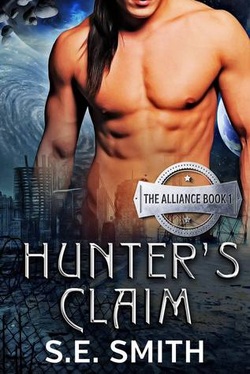 Meet Hunter -- an overly large, cat-humanoid-alien dude who is a warrior for his alien species (aka the Trivators) who have recently occupied Earth. Unfortunately, he and his friends (like Dagger and Razor) are really crappy warriors and they fail at just about every mission they go on. It's through one of these failed missions that Hunter is captured and it's up to scrappy, survivalist Jesse to rescue him from his captors.

As thanks (?) for rescuing him, Hunter takes Jesse as Amate (note that it's not as "a mate"...but as "Amate". Original, yes?) which bonds him to her for the rest of his life. He can't seek relief from anyone else...not even from himself (in a so-called "relief room")...except from her. Nice to know that he asked her if she even wanted to be rescued and bonded to him forever before he did it, eh? Oh wait...he didn't ask. He just claimed her as his own and then started walking around naked.

But wait...there's more, folks. Hunter and crew take Jesse and her two sisters (convenient that Hunter has two friends and Jesse has two sisters, isn't it?) to the Trivators' home world...which is pretty much the USA. But in space. At least it seems to be...sadly, not much worldbuilding is done to really set up the Trivators' home world. So we are left to assume it's pretty much like Earth...just with big cat-humanoids and a male-centric society. But good thing everybody speaks English! And good thing there's no culture-shock after being essentially abducted and plopped down in an alien world!

I could go on...but I shan't...just in case you want to read the story. There are a few plot points that I could spoil, so I shall refrain. It's a bad book. It's so bad that it might be entertaining if you are in the mood for a campy read.

It seems as though the Kindle edition wasn't proofed at all. Spelling errors and awkward sentences abound...

I'm definitely disappointed...I was in the mood for a fun "Alien Meets Human" book. Not sure what I got instead...