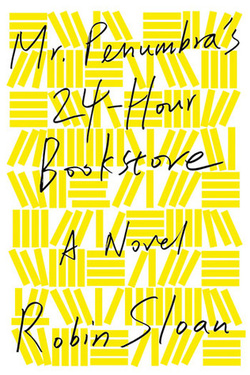 Ok...did the cover of anyone else's copy glow in the dark?? Hey, that was pretty cool.

In <b>Mr. Penumbra's 24-Hour Bookstore,</b> Clay Jannon finds himself a victim of the Great Recession.  To make ends meet, he takes the night clerk position at the enigmatic 24 hour bookstore run by Mr. Penumbra. Clay finds more than your typical bookstore, however, and sets out to discover what's really going on in and surrounding Mr. Penumbra's bookstore.

This was a fun, quick read and...to be honest...not exactly what I was expecting.  Beyond the plot itself, I think the book addresses the gap between "regular" books and the e-reader evolution which I found to be quite interesting.  I think most people have friends who fall into one of two camps - the "I only read books on my e-reader device" camp and "I only read books that I can hold in my hand, turn the pages, smell the 'book' smell, etc..." camp.  Both of these groups are represented in Mr. <b>Penumbra</b> and I found the interaction between the two to be quite interesting.

I only had three small issues that prevented me from giving it a full 5 stars.  First, I tend to stay away from books/movies/media that overuse pop culture references just because they are so quickly dated that future re-reads/re-watches/etc often just don't happen.  Secondly, <b>there was SO MUCH Google</b>.  I hope Sloan was payed for name-dropping/advertising/etc because Google was featured like a sponsor vehicle in a movie - every 10-15 minutes let's trot out the sponsor vehicle since they paid for the advertising space.  Lastly - I wanted the ending to have a little more punch...a little more pizzazz.  It definitely seemed to keep winding up...winding up...winding up...only to have a rather flat finale.  I mean, the finale made sense.  I just wish it had a little more oomph.