The Darkest Night by Gena Showalter 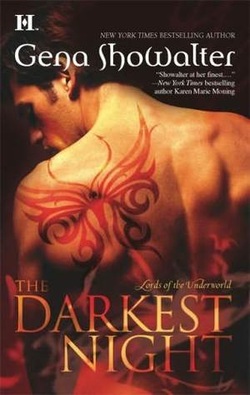 The Darkest Night and The Darkest Kiss (books one and two, respectively) kick off Gena Showalter'sLords of the Underworld paranormal romance series.  This series has been on my radar for a while and has been recommended to me several times since I do enjoy a good paranormal romance.  It seems as though a lot of people compare this series to the Black Dagger Brotherhood series by J.R. Ward.  While it has it's similarities, the BDB series is, in my opinion, immensely better.

I'll be honest - the series does have an interesting premise.  There are several Lords of the Underworld - it seems as though most, if not all, of the Lords were involved in the opening of Pandora's Box back in the day.  As a punishment for unleashing Pandora's evils out on the world, each Lord of the Underworld is cursed to carry one of the evils/demons that had previously been living within Pandora's Box.  As is the thing with these kinds of series, the men have had to endure the curses for centuries, but all seem to find love and/or redemption around the same time.

The Darkest Night introduces us to Maddox, cursed to carry the demon of Violence, and to Ashlyn, a human woman with a penchant for hearing voices.  Ashlyn seeks out the Lords in an attempt to try and stop the voices in her head.  She stumbles upon Maddox who initially thinks she is Bait (humans who are used for...well...bait by the Lords' enemies - the Hunters) while he is out seeking Hunters that are trespassing on the grounds.  The two team up to fight the powers that be and...hopefully this shouldn't come as a spoilery surprise...they fall in lust (er, love?) and the plot moves on.

The Darkest Kiss then moves on to Lucien who is cursed to carry the demon of Death.  This second installment starts out rather abruptly (and, in my honest opinion, quite awfully) with Anya (the goddess of Anarchy...a "minor" goddess in the Pantheon, but don't tell her that apparently) stalking Lucien in a club while the other Lords (or maybe it was just Paris, the Lord saddled with the demon of Promiscuity? I can't remember) have sex on the dance floor with women.  Anya has her own issues as the daughter of a promiscuous daughter and the product of an affair.  Anya is cursed by Themis to an unfulfilled, unhappy love life because of the sins of her mother.  Anya has angered the Titan god Cronus...so much so that Cronus has ordered Lucien to kill Anya.  So begins the cat and mouse game that's peppered with lust (er, love? Maybe?).

I just didn't like these.  I didn't really enjoy the first book and I only gave the second one a whirl because it came up as the book of the month in a bookclub I enjoy.  In both books, the characters are flat, the writing boring and somewhat awkward, and the love just isn't there.  Oh, there's lust aplenty.  But, a "lust story" holds no appeal for me.  I wonder if the series doesn't get better as the author matures in her writing style and as the characters grow (and I don't know enough of Showalter to know whether or not these were written early on in her career or not).

I just don't know if I will continue on in the series to find out if they get better.