My life as a white trash zombie by Diana Rowland 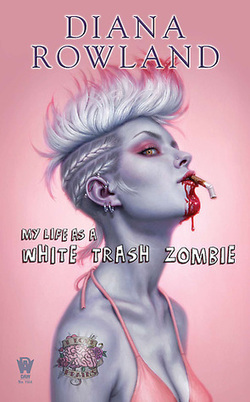 I really like the back cover blurb for this book, so here it is:

"Angel Crawford is a loser.


Living with her alcoholic deadbeat dad in the swamps of southern Louisiana, she's a high school dropout with a pill habit and a criminal record who's been fired from more crap jobs than she can count.  Now on probation for a felony, it seems that Angel will never pull herself out of the downward spiral her life has taken.


That is, until the day she wakes up in the ER after overdosing on painkillers.  Angel remembers being in a horrible car crash, but she doesn't have a mark on her.  To add to the weirdness, she receives an anonymous letter telling her there's a job waiting for her at the parish morgue -- and that's an offer she doesn't dare refuse.


Before she knows it she's dealing with a huge crush on a certain hunky deputy and a brand new addition: an overpowering craving for brains.  Plus, her morgue is filling up with the victims of a serial killer who decapitates his prey -- just when she's hungriest!


Angel's going to have to grow up fast if she wants to keep this job and stay in one piece.  Because if she doesn't, she's dead meat.

This was such a fun, fun read!  This book has some fun cover art - after seeing the cover and reading the back blurb, you know you are in for a treat.  Is it funny?  Well, I guess that depends on your sense of humor.  Obviously, with a protagonist who eats brains like she used to pop pills, the humor is going to be very dark.  And a lot of the dark humor was (brain?) sandwiched or included in some pretty gross (brain?) matter.  With a lead character who throws out lines like: "Why did I have the urge to grab a handful of that pink and grey mass and shove it into my mouth like movie popcorn?"  you know you are in for a treat.  Well, I think so at any rate.  If you don't have a dark sense of humor and/or if you get pretty queasy when it comes to some graphic descriptions of brains/rot/etc...well, then you may want to pass.

If you are up for the challenge, however, you may find (like I did) that the book featured a fun, light mystery (who's the serial killer and why is he/she taking all the heads and depriving Angel of her yummy brains?) with a touch of zombified romance.  White Trash Zombie was a lot of fun - largely because it's different than the bulk of its genre.  I didn't feel like I was reading the same story with different characters...this story felt fresh and fun.

Oh, and I read it on the pool deck of a cruise ship with one (or two?) mojitos in hand so that may have contributed to my enjoyment of it as well.

Still...whether or not you have a mojito in your mouth and Caribbean music in the background, check this one out.  It's an undead gem.