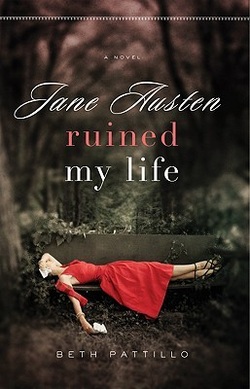 I didn't know whether to go 2 gnomes or 3 gnomes on this one. It's light, fluffy chick-lit down to its last sentence. I picked it up because I found the premise interesting -- meet Emma, a newly divorced English professor who sets off to London to (re)discover herself and try to restore her academic career with the discovery of a lifetime - Jane Austen's lost letters guarded by the secretive Formidables.

The story started out alright...a little cliche, but alright. But then it just started to spin its wheels and not go any further. Emma is a pretty annoying lead character (I hesitate to even call her a 'heroine')...I think Patillo was trying to present her as a flawed character (much like Austen's characters were flawed0, but Emma just comes across as whiny and incapable of doing anything.

I breezed through the last fifth of the book and I'm glad that I didn't spend much more time on the story. I won't give any spoilers, but I was highly dissatisfied with the ending. On one hand, I understand why the ending was as it was...but on the other hand, I wish it was more satisfying. I really can't go into more detail without giving a spoiler. I think there could have been ways the author could have more solidly hinted at a satisfying ending...be it through a line or two of dialogue or through the Epilogue. As it stands, I finished the book and was left with a general feeling of "So...what happened??"

I was also amused by the portrayal of academia and professors. As someone who has been in graduate school, I find it extremely hard to believe that a TA claiming their supervisor, a full Professor employed by the university, has committed plagiarism would be enough to get Emma kicked off the faculty. Even with her star, tenured ex-husband backing up the TA...I just don't see the university going "Get thee hence, plagiarist!" quite that easily. There are SO so many politics involved in higher education (at least in my experience) that this would not have been a quick or an easy decision for the university unless Emma had done something else to ruffle the university's or the faculty's feathers.

So, I will give this one three gnomes because I guess I liked it. And I did finish it. I just wish the story had lived to its potential.