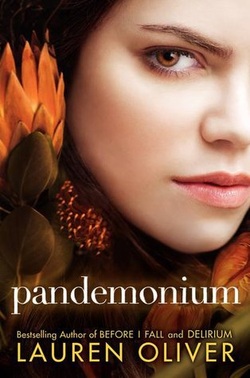 The Delirium series keeps delivering!  I am enjoying this dystopian tale of a girl and her "disease".

Pandemonium picks up shortly after Delirium.  Lena is in the Wilds and struggling to adapt to life post-Alex.  A group of survivors rescues Lena and nurses her back to health.  Understandably depressed following the events of the conclusion of [book:Delirium|11614718], Lena takes a while to grow into her new role as an Invalid.  Joining the resistance, however, adds a new facet/a new purpose to her life as she infiltrates the Zombieland as a resistance fighter.

Pandemonium was slightly different than Delirium in that it was told from two different angles - "Then" and "Now".  At first, I did not like the switch from past to present - I found it confusing.  About 2/3 into the book, though, I really started to like the two time lines.  This book kind of felt like a locomotive gathering steam until it gets a little frenetic at the end.

And what a way to end the book!  Definitely looking forward to reading Requiem!