A Court of Thorns and Roses by Sarah J. Maas 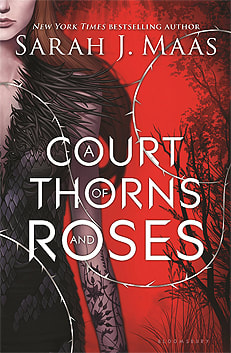 Do you ever read a book where the text kind of blurs together and before you know it you've skipped ahead two pages and don't even know what you read? That was ACOTAR for me. I liked the book...I liked the story...I just had a hard time sticking with it.

I think my issues that drove me out of the story time and time again were four-fold:

1. Feyre drove me NUTS. How many times does girlfriend need to be told "Don't do this or you'll die"...and yet, she goes and does it. Cue: momentary irritation from (insert male character) followed by almost immediate forgiveness from said male character. Rinse, repeat. I'm all about the plucky heroine, but this was just too much. And side note -- there was mention of "watery bowels" WAY to much...nothing like reading a delightful fantasy only to have sudden images of...not fantasy. And definitely NOT delightful.

3. I've read a lot of books set in a faerie world...Seelie and Unseelie Courts...and this one was just - different. I kept trying to apply "traditional" faerie rules on Feyre and the High Fae and it just didn't work because ACOTAR had its own rules. Nothing wrong with creating a new faerie world - it was just hard to become accustomed to.

4. The riddle from Amarantha was so easy IMO that I just kept watching Feyre go through her trials with irritated frustration. I mean, by that point we had spent almost 300 pages of the book revolving around a mortal's love for the fae and it was obvious that Amarantha was obsessed with mortal love...so one would easily conclude that the answer to the riddle was....a disease?! C'mon, Feyre -- really? You're right...I'm sure Amarantha was talking about tuberculosis or typhus...not love which we've been talking about for the WHOLE BOOK.

That said, I did enjoy the book. No, really -- I did. I want to know more about Lucien and I want to know more about Rhysand. Alis interested me. Everyone else...meh. I am curious about the direction the series will go because this almost seemed like it was supposed to be a standalone book but then the last chapter was amended to have a few lead-ins for a sequel. Everything was wrapped up but then [ surprise - she's fae now!and [what caused Rhys to stumble? . If those two things hadn't happened it would have been a fine ending for the story. But, nope...everything has to be a series these days.

I'm waffling between 2 and 3 stars on this one. I liked it...but it drove me nuts and was slow going. I already bought the second book so I will, of course, be sticking with the series. I just thought I would like this one more that I ultimately did.