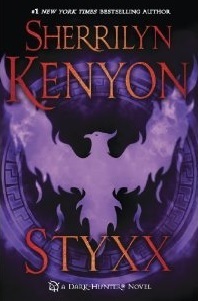 About a third of the way through this beast of a book an earworm of a song just started playing over and over in my head.  Ever heard Don Henley's song "Dirty Laundry"?  The chorus goes like this:

I was so excited to see this book because a) whenever Kenyon writes a huge novel like this I know I'm probably going to like it because she can take her time developing the characters and plot and b) she finally went back to the "normal" Dark Hunter world (ie. Acheron/New Orleans/ect...) and I was craving that after the last few novels being set in Las Vegas/the West with a different pantheon of gods.

And a word of warning right here --> there's a lot (and I mean a LOT) of rape in this book.  It's brutal.  I was prepared for Styxx to go through crap because all Kenyon's male characters go through crap...but Styxx goes through a whole new level of crap that I wasn't prepared for the brutality of it all.  Just a warning.

Also - I would not read this book out of order...at the very least read Acheron's book first.  If you read some of the other DH books about "big" characters (ie. Katra/Sin, Talon, etc...) I think it will help in understanding the over-arching picture.

Sherrilyn Kenyon and I have a hit or miss relationship - I enjoy the Dark Hunter world and I want to enjoy *all* of her books.  The problem is that some of the books just seem like something she fired off to her publisher with nary a second thought.  The writing can be spotty and the characters a little "meh".  Kenyon's writing style isn't my favorite either as some of her word/phrase choices often throw me out of the story.  Then came the book about Acheron which I just really loved.  I loved Acheron - it was an in-depth book about a complex character and Kenyon really spelled out his entire story and didn't skimp on the details.  Acheron was a good mix of romance and plot - I loved it.

Kenyon takes the time to make sure you know each and every injustice that Styxx suffered through.  And when you thought you heard it all...he went through more crap.  I mean, it never ended.  I had to take a break midway through just because the story was so heavy...and yet I felt compelled to return to the story quickly.  I had to know what happened with Styxx and if the brothers would reconcile (and how they ever could reconcile).

The only thing that knocked it down from 5 to 4 gnomes was that some of the story seemed a bit repetitive.  Styxx goes through crap...then he goes through more...then some more...then some more...oh wait - there's more crap to wade through...then more...aaannndd we have more crap.  This seriously goes on for 800 pages.  While all the crap was crucial to the plot, it almost (and I emphasis the word "almost") became a slog.  I don't know how Kenyon could have reduced the amount of crap and still made the points she needed to make with Styxx...but the almost-slog through all the crap knocked it down a gnome in my book.

But now...some 830 pages later...I am glad I know Styxx's story. I'm more curious than ever as to how the DH series will conclude (I feel like we are reaching the end-ish of the story arc?  I may be wrong...) and I definitely have a renewed interest in the DH lore.