The Broken Kingdoms by N.K. Jemisin 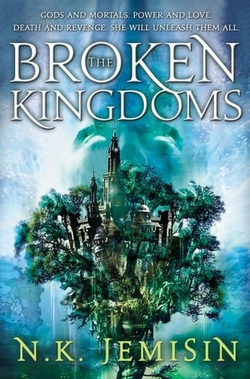 I think I may have found a new favorite author! The Broken Kingdoms by N.K. Jemisin was excellent.

The second installment of the Inheritance Trilogy, The Broken Kingdoms follows a blind artist, Oree Shoth, in the years following the conclusion of the first book - The One Hundred Thousand Kingdoms. Oree is in the middle of an on and off again romance with a godling when a dangerous new cult catches a whiff of her magical abilities. To add to the troubles, godlings are murdered across the city and it's up to Oree and her mysterious new friend "Shiny" to not only escape the cult's clutches but to put a stop to whoever is murdering the godlings.

To be honest, I was slightly concerned about Jemisin following another heroine in book number two. I was unsure if I would find the new heroine as engaging as Yeine. While she still makes appearances in The Broken Kingdoms, Yeine is not really integral to the plot line. This is definitely Oree Shoth's book. Once I got used to that fact, the book really took off for me. I found the story engaging and the writing style very similar to the style of the first. The world building subtly evolved and grew.

I did find that I didn't get as wrapped up in this installment as I did in the One Hundred Thousand Kingdoms...which is why this one got four gnomes as opposed to the full five. I think the reason for that was I just found Yeine's storyline more engrossing. Oree still had her fascinating points, however, and she was definitely a great subject. I am looking forward to wrapping up the trilogy...hopefully it reaches a satisfying conclusion.