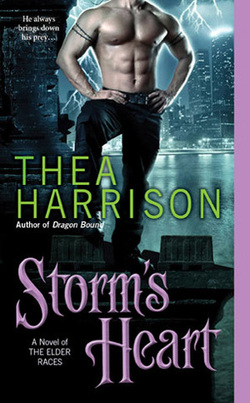 I just keep staring at the picture of the cover and one question remains --> why cut off Tiago's head?? I mean, yeah, it's "that" kind of book, but still... And to add insult to injury, the library edition I have has the library barcode placed smack dab on Tiago's shirtless chest...which only leaves Tiago from the waist down and half a cityscape in the background.

It's just kind of awkward.

You know what else is awkward? The romance in this second installment of The Elder Races. I mean, I liked the book as a whole...but it's really hard to believe that Tiago goes through such a huge character change in less than a week.

Day one: Tiago is a brooding Thunderbird/Destroyer of Worlds...surly and military-minded.

Day two: Tiago is a besotted, possessive alpha-male ready to leave the world he's been living in for...oh, you know...since practically the dawn of time.

Now, granted, Niniane has been in Tiago's world for several years, but she admits that Tiago was always gone doing warlord-y stuff so she didn't really have that much interaction with him during her time in the Wyr demesne.

The romance just seemed contrived and forced and way way way too fast. I wish the romance had evolved a bit more gradually...had been more organic feeling. Since the romance was one of the pivotal elements of the book, the fact that it was just kind of weird made me drop it down two stars.

The rest of the story was pretty good, though. I liked reading about Tricks' journey to take back her inheritance. Harrison sets up the premise for the third installment as well and I definitely plan on continuing the series.

Insta-Love and cheesy shirtless covers, however, put it solidly in the realm of cotton candy.