Midnight in Austenland by Shannon Hale 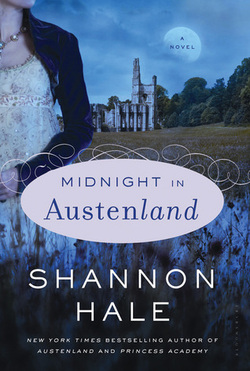 What an enjoyable series! I hope Hale continues to write Austenland books - so much fun to take a modern day jaunt through Regency England.

As books go, I thought Midnight in Austenland was much better than it's predecessor. While Austenland #1 was focused on setting up the Austenland world and the discrepancies between modern day living and a modern day Regency "theme park" Austenland #2 was focused on providing characters with more depth and a mystery plot that also showcased an unexpected romance. To be honest, I was expecting just another version of the first book with a copycat romance ('cause if it ain't broke, why fix it?), but instead, was surprised with a mystery novel and a romance that I didn't really see coming.

I think you could pick up either #1 or #2 and be satisfied with the story...however, I did notice that less attention was spent in #2 detailing the Austenland world. I found myself thinking back to #1's world-building (even though it really wasn't ALL that in-depth) to supplement #2's story.

So, I think I like #1 for its world building and immersion into the Austen world...and I like #2 for its characters and WAY more substantial plot line.

When can we expect the third installment??