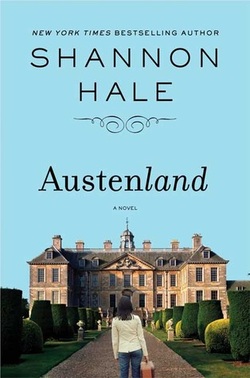 I loved it. It was a wonderful piece of escapist fluff...but that is all I was expecting from it. If you are expecting a piece to rival Austen's prose...or an in-depth romance such as you'd find in Austen's novels...or even a story reminiscent of the "Lost in Austen" miniseries - you will be disappointed.

The book reads more like a novella than a full-fledged novel. In fact, it almost reads like fan fiction. I polished this one off in under four hours - super light reading. It read like a fictionalized account of a fun, fluffy chick flick (a la Nottinghill or some other Hugh Grant led RomCom). In fact, if they ever make this into a movie they probably should go ahead and cast Hugh Grant in it.

The premise was loosely established and then not really developed any further - Hale gives you just enough details to get Jane into Austenland and then leaves that well enough alone. The whole story moves along at a pretty fast clip - if I had any criticism it would be that I wished Jane's time in Austenland was more established rather than breezed through.

I think the key to loving this book is to go into it knowing that it a) is an uber fluffy chick flick book...b) plays on women's attachment to Mr. Darcy and Regency-era England...c) is not an homage to Jane Austen's writing or story style...d) should not be compared with other Austen-esque things on the market today (such as Lost in Austen and the like).

Bottom Line: this is escapist fiction...immerse yourself in the world and try not to focus on the flaws and you will probably really enjoy this little vacation in Austenland.