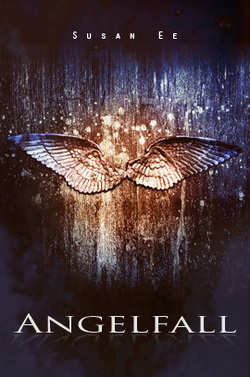 There is a lot of love out there for Angelfall. I think it's well-deserved love.Angelfall is one of those books that hooks you by its bat wings and drags you along for all 247 pages until you finish and go "whoah!". It's compulsively readable and so fast-paced you feel like you are sprinting away from the killer angels right along with Penryn.

So you may be asking - if you liked it and if it's such a readable book...why knock it down two stars?

It lost a star because it was just too short. Yes, 247 pages is not enough for this book. It easily could have had another hundred pages to flesh out the world and the situations Penryn and Raffe found themselves embroiled within. Because the book IS so readable and fast-paced, it felt like I was flying by each plot point within the book. I know it's set in a modern-ish world, but I still felt like more world-building and more building up of the plot could have really made this book a lot more satisfying.

It also lost a star because there wasn't much character development. It's hard to feel anything for a romance or for a character's suffering when you hardly know the character. I think the lack of character development may have been a result of the book being too short...again, another 100 pages would have allowed Ee to really establish the characters. As it stands, I could really care less whether Penryn recovers her sister and/or she gets together with Raffe. *shrugs*

Don't get me wrong - I really enjoyed this book. Despite my ambivalence towards the characters and their plights, I already went out and got my hands on the second installment. It really does deserve all the love it's been receiving as well - it's one of those books that makes you scratch your head at publishers wondering why they chose to pass on this gem. It's always great to see an indie book make such a huge splash.

Bottom line - check out Angelfall. While I may have not liked its shortness and/or lack of character development, I am definitely in the minority. It's a fun, quick read with an interesting premise.