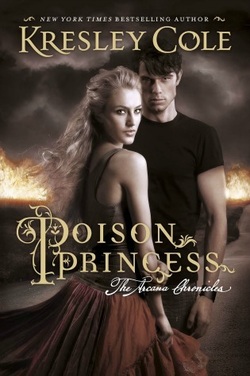 I really enjoyed this one!  I think it's safe to say that it's my favorite "dystopian" genre book at the moment.

In a humongoid nutshell, Evie is a tormented teen who discovers that she is part of a group of young adults who embody the various Tarot cards.  It's up to Evie and the other young adults to either destroy the world or save it.

This book was immensely readable and hard to put down.  I'm still on the fence about Cole's Immortals After Dark series...but I wanted to give the YA book a try.  I'm glad I did.  This book definitely has a different flavor than the IAD series.

The only thing that kept me from ranking it a full five gnomes was the male lead and the annoying way Cole phonetically wrote out words in a Cajun accent.

Jack Deveraux?  Yeah, he's a douchebag.  I may be showing my age here, but to watch him think with his "other" head for just about the whole book and then see Evie justify it away time after time after time...yeah, no.  That just doesn't fly.  Hopefully he redeems himself in the next book...otherwise, I am going to root for the other dude in the inevitable love triangle that is to come.

Evie was on track to be annoying, but like I figured - she came into her own by the end of the book.  Hopefully she doesn't backtrack in book number two just to win JD back...'cause, girlfriend - he ain't worth it!