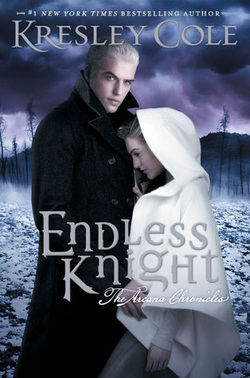 Endless Knight picks up right where Poison Princess leaves off...almost like it's part of one giant book that they cut in half at the end of a climactic chapter.

This second installment in The Arcana Chronicles is excellent...maybe even better than the first book. Endless Knight delves deeper into the world After the Flash and introduces the reader to more Arcana Cards ready to do battle.

I wonder if I liked Endless Knight better because you see less of Jackson in it? Oh, Jackson (or "Jack" as he's suddenly called in this book) is still there, no worries...but the focus is definitely on Death - when will Death show up/who is Death/what will Death do to Evie when he gets her/etc? Cole did a great job of creating a sympathetic figure...Death seemed to fall into the gray area of bad, but not quite bad.

While we're at it...let's point out the elephant in the room. Evie definitely has a type she goes for, doesn't she? This shouldn't be a huge spoiler since you can see the cover art and all...but inPoison Princess it's all about Jackson...now we are intoEndless Knight and she's easily distracted by Death and their previous history.

Yep...Kresley Cole has implemented the tried and true (and tired?) trick of young adult love triangle. So, let's go ahead and pick teams now...are you Team Jackson or Team Death? I know a lot of people are sick of the YA Love Triangle, but it doesn't seem to be a weary plot point in this story. Both guys are sympathetic enough that you can root for either of them and still feel bad that the other guy is going to lose out.

I'm curious to see where Cole will take The Arcana Chronicles. This next bit might be a spoiler so stop reading now if you aren't interested in my hypothesis...

Ok - so I did notice the one line thrown into this book about the Card that doesn't know he/she is a Card until he/she kills another Major Arcana. Pretty sure that will be Jackson. And I think Jackson will turn out to be the Sun Card. Evie as the Empress is attracted to Death because he is her antithesis...yet, the Sun is what would make the Empress (ie. life) grow and flourish...so the Sun seems like it might be the right choice.

I guess we shall see. Going to give this one five stars because it was a great read that stuck with me even after the last page was read. Can't wait for number three!