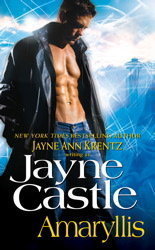 I only finished it because I was stuck in the car for 6+ hours and had packed my alternate books.  Wow, this was not a winner for me.

[book:Amaryllis|1107545] takes place on a remote planet, St. Helen, that is closed off from earth.  Forced to adapt to the planet that's remarkably like earth (except for the extremely handy plot twist that all advanced earth technology doesn't work and disintegrates on St. Helen), the human residents find themselves developing supernatural-like talents.  These talents work in tandem with prisms (which also develop in certain people) that focus the talents to accomplish a specific goal.  Amaryllis Lark, a professional prism contracts a job with sexy CEO Lucas Trent - who happens to be a talent with off the chart power.  They quickly find themselves mixing business with pleasure as they embark on a steamy (jelly-ice filled?) love affair. Throw in a potential murder and Amaryllis and Lucas are in for a wild and bumpy ride full of jelly-ice and arranged marriage agencies.

Ok, so here are my issues with this book:

b) Attack of the InstaLove!  Ugh.  I hate InstaLove.  I don't know why authors think that you can introduce two characters, not develop them any, and then think it's ok to have them suddenly in love.  In the second chapter.  Nope...doesn't work for me.  I don't buy it.

c) Jelly Ice.  What a horrible name for anything.  All I can picture is a jello jiggler shaking it's jelly ice bottom at me.  Ick.

d) World building - or lack thereof in this case.  I'm sorry, but you can't explain it as "it's a new world...but the same as earth...except that it's not because all convenient technology disintegrates".  That's not world building...that's making it easier for you to include crappy substitutes like "jelly ice" and not develop it any further.  I think if Castle could have spent a little bit longer fleshing things out, she could have created a really fun world.  Instead it's two-dimensional and seems to be a lazy way out of thinking through the world building process.

e) Foreshadowing, anyone? It was super easy to peg whodunit and why WAY early on in the story.  Maybe some non-essential characters would have helped add mystery to the story?  I don't know...

So why, if I hated it so much, did I give it two gnomes?  Well...I only did that because I have read some of Jane Ann Krentz's other stuff under various other pseudonyms (she has so many!) and enjoyed it just fine AND I am remotely curious about the other two heroes that were briefly mentioned in Amaryllis...so two gnomes because I have a small inclination to read at least one more...jelly ice and all.