The Elite by Kiera Cass 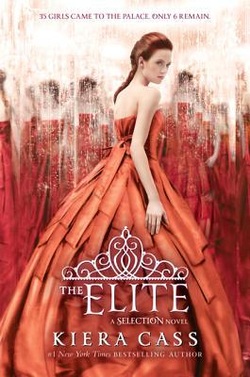 The first stage of the Selection is over and Maxon (or is somebody else pulling the Selection strings??) has narrowed the girls down to the "Elite". There's really not much in the way of new plot development...the rebels are still attacking, America is still waffling between Maxon and Aspen and the cattiness between Elite-rs is growing more pronounced. Other than a few other revelations, there's really not much going on...

And yet I still devoured this book. I tell you - it's like my daily dose of reality tv in novel form or something. The Dystopian Bachelor:Season 2!

I'm curious to know whether or not I have an idea as to what America's final decision will be. I think I do...time will tell, though.

Oh, and even though Maxon is still a weak character...(and let's be blunt - he's kind of a man-whore in this book), I'm still rooting for "Team Maxon".