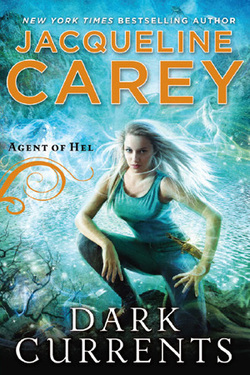 I have a confession to make...I am still trying to truck on through Kushiel's Dart. Look at my "to read" shelf and it's been on there for a few months. I *think* I like Kushiel's Dart...I'm just finding it slow-going/hard to become immersed in. That said, I decided to go ahead and pick up Dark Currents and give it a whirl even though I wasn't sure if it would suffer the same fate as Kushiel's Dart.

Whelp...Dark Currents met with a better fate. I enjoyed the story. I wavered between giving it 3 or 4 stars...so a more accurate assessment would probably be 3.5 stars as far as my opinion is concerned. The main character was interesting - I liked the half-breed angle. I also liked the tie-in of so many different folklores throughout the story.

Not much action on the romance front BUT if Carey is turning this into a series there is potential for some messy romance ahead. Three potential suitors for Daisy? That spells drama. [I'm rooting for Stefan to come out ahead]

The only thing that I would really say bothered me throughout the book was Daisy's tail. That's right...tail. I would have been fine if Carey mentioned that she had a tail...it was the constant descriptions of what the tail was doing that was really kind of...well, gross. Curling here...wagging there...coiling over here. Um...yeah...that's kind of weird.