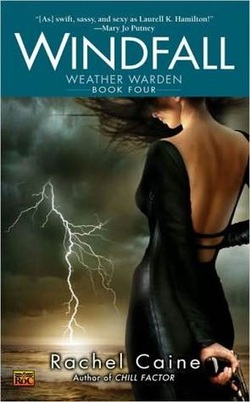 How do you know you have been reading too many Weather Warden books lately? Why, when you are driving home from a relative's Christmas party in the middle of a big thunderstorm and you think "wow - there must be major conflict between the Wardens or the Djinn...", of course.

Ok, not really. But I did just drive through a storm and the thought "Weather/Earth/Fire Wardens and Djinn - what an excellent premise for a series!" did go through my head.

Windfall is the fourth installment in the Weather Wardens series. I'm not going to rehash the plotline because, frankly, this is one of those series that you pretty muchhave to read in order. And, really, the whole series so far has been pretty formulaic - there's trouble, Joanne (main character) is caught up in it and looks to her lover Djinn, David, to save the day...something probably happens to prevent/limit David's power and Joanne is forced to take the lead and something really bad happens to Joanne in the process and/or she loses David or David's bottle...but, she manages to pull through and then the book ends with something big problem looming on the horizon that is just big enough to make you want to go pull the next book in the series to find out how Joanne will beat the odds yet again.

Sounds tiring, doesn't it? But, surprisingly, it isn't tiring or redundant. Each of the four books I have read so far have been enjoyable, quick reads. The fashion sense and some of the other things are starting to show their age (I think Windfall is turning 9 years old this year?), but other than that, I have found the series to be a fun read.

Plus, there are NO vampires. NO werewolves. NO other overused fae/paranormal/fantastical creature. No, this book has Djinn. And that's a win in my book.

The only negative that dropped this one down to 4 stars for me was that there seemed to be a lot of filler and set up interspersed with random bursts of rapid-fire plotline. I would have preferred something a little more balanced to make the in-between parts less draggy. And the villains were projected from the beginning...Joanne kept stumbling through the story clueless about who the bad guy(s) were which I found implausible considering they pretty much had flashing neon signs with arrows pointing to them as "VILLAIN!!".