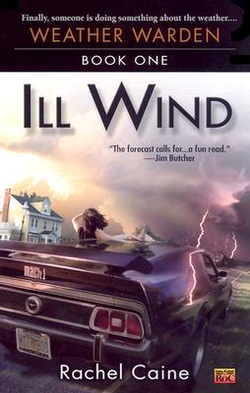 Have you ever looked up at the sky (or shaken your fist at the Weather Channel) wondering what's up with the weather these days?  Well, Rachel Caine gives you the explanation you were looking for: a select group of humans (called Wardens) who can control the various elements (like Weather, Fire, and Earth) are embroiled in a battle against themselves and Mother Nature as they try to regulate Nature's wrath upon the earth.  Oh, and they harness the power of the aether (where they do their Warden-y stuff) with the help of captive Djinn, of course.

So, what happens when one Weather Warden, Joanne, discovers that she's been corrupted with a Demon Mark (which, as you may have guessed, is bad news for anyone let alone a Warden)?  She seeks out the strongest Warden of them all - Lewis - who happens to be the only Warden who can harness all the elements, rather than just one.  When her plans go awry, however, Jo stumbles across a mysterious hitchhiker named David and the two of them embark on a journey to not only save Jo from a certain death-by-demon-mark, but to also save the world.

Ok, so that's obviously a hugely generalized summary.  I'm writing this review having read several books into the series and I don't want to give any future spoilers, so I will just stop there with the plot.

But, what a fun concept for a book/series.  Caine does a great job with the world building...it comes across as the "real world" - especially since the average person doesn't realize that the Wardens are responsible for holding back Nature's wrath.  Once she set up the general populace's ignorance, Caine was free to expand the Warden and the Djinn universe and she does so perfectly.  From the aether to the Djinn to the crappy politics within the Warden's world, it comes across as just realistic enough to make it believable.

I found the Djinn concept to be really interesting as well.  I'm glad Caine stayed away from the stereotypical genie (ie. Aladdin's genie or the like).  These Djinn are more forbidding, more dangerous.  Their enslavement to their Warden masters is an interesting element and puts a pall on the Wardens actions and will certainly be something Caine will address as the series progresses.

The writing style is a bit light and tad fluffy.  If you are looking for an epic urban fantasy, this is probably not going to scratch that itch.  This is pure escapist fiction and will probably be a quick read...but sometimes that is just the book you need.