on the prowl by Patricia Briggs 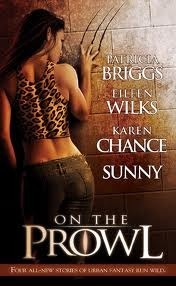 Note --> I only read the short story Alpha and Omega out of this collection.

I guess now's as good of a time as any to confess -- I don't like short stories or novellas. I never really have. I enjoy fully developed characters and a complex/in depth plotline and that can be hard to do well in a short story (not impossible...just difficult).

Briggs does a pretty good job in Alpha and Omega. The main reason I picked this anthology up was to read her novella before I started the full "Alpha and Omega" series (as has been recommended to me to do by several people). The big complaint that I saw in regards to the full series is that Briggs really begins the plot with this novella -- and I think they are correct in that determination.

Briggs really jumps into the action with this novella. The whole of the plot takes place within 24 hours or so...and a LOT happens. The world is the same world as the Mercy Thompson series which I really enjoy. One of the main characters is Bran's (the Marrok..ie. leader..of the werewolves) son Charles who we meet briefly in the Mercy Thompson series (at least it's a brief meeting where I am at in the series at the moment...I don't know if he comes into the stories in later MT books). Charles is known as the Executioner and he is sent to Chicago to settle a matter amongst the local werewolves. While in Chicago he meets an intriguing young female werewolf and he discovers, unbeknownst to her, that she is a rare gem among the werewolf hierarchy - she's an Omega.

It held my interest fairly well, but I don't know if I would have chosen to read it had it been a standalone novella. One thing that I enjoyed about it was that it didn't read like pure set-up for the full-length series. Briggs may have written it for that express purpose, however, you could read this novella...put it down...and be satisfied with the story without going on to read the accompanying series.

So...four stars for a decent novella (despite my personal bias against them). If you are a fan of the Mercy Thompson world definitely check this one out.