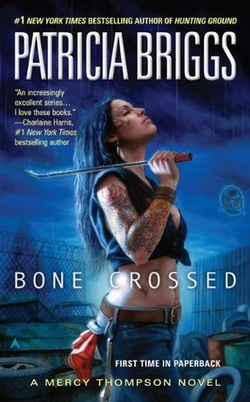 Another solid installment of the Mercy Thompson series. I was hesitant to start reading this one so soon after finishing Iron Kissed because I really enjoyed Iron Kissed.

Despite my reservations, Bone Kissed was pretty good! In this novel, Briggs takes us back to the vampire side of the Tri-Cities and we delve further into the mess made by Andre/Stephan/Mercy etc that was addressed in an earlier book. The vampire seethe Mistress, Marsilia, is upset at Mercy's actions that resulted in the death of Andre and seeks to punish Mercy...even if that means murder. As Mercy starts to deal with the fallout of murdering a vampire, however, she is introduced to a vampire that even other vampires call "The Monster".

Oh, and Mercy officially makes her decision -- Adam or Samuel?

I think, as of right now, I still prefer the fae side of the Tri-Cities story arc. The vampires are interesting and definitely more developed at this point in the plotline, but I am kind of tired of vampires. I know when the books originally came out, vampires weren't as cliche as they are now...but I'm still a little burned out on the vamps. Briggs does a great job, however, establishing interesting focal points within the vampire mythology that kept me interested in the plotline and the character development. Stephan is a great example - I liked him in book one, but I like him even more now that I am in book four. Briggs is excellent at developing rich, flawed characters.