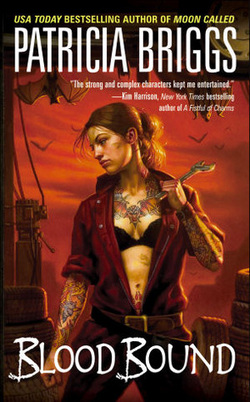 I know I'm kind of late to the game with this series - but I really enjoyed Blood Bound! Such a fun read!

In Blood Bound, Stefan the vampire calls in the favor Mercy owes him and the two of them go off after a serial-killing vampire who seems more ruthless than usual for a vampire. Shifted as a coyote, Mercy discovers that the evil vampire they are tracking is actual a demon-possessed-sorcerer-vampire which spells trouble for the whole community - for regular humans and supernaturals alike.

The Mercy Thompson has some flavors of the Sookie Stackhouse novels (I'm not sure which series came first?)in that there are vampires, werewolves, and shifters (oh my!)...yet the characters are SO. MUCH. BETTER. I just can't stand Sookie or Harris' writing (hence why I gave up mid-series on that one)...but I really enjoy Mercy Thompson and crew. Mercy isn't your average female lead and it's nice to have a lead character who doesn't quite fit the average heroine mold. I like the world Briggs has constructed as well - she tries to make her world blend seamlessly into the world as we know it and I think she does a pretty good job with it.

Definitely a great read in a great series that will scratch that paranormal fantasy itch you have.